While living in China, UK alumna promotes quality education to be found within Gatton College of Business and Economics

She was only 19 years old when she arrived in Lexington in 2012 from Beijing, China, to begin her freshman year as a marketing major in the UK Gatton College of Business and Economics. For her own convenience, one of the first things Jie He ’16 BE did at the start of her new college life was to modify her name a bit. She chose the name Ruby — “like the gem,” she says — which she still uses today.

Two of the reasons Jie “Ruby” He came to the University of Kentucky were that she could transfer school credits from China and tuition is reasonable, she says.

“Also, someone told me the basketball team was famous in the United States,” she says. 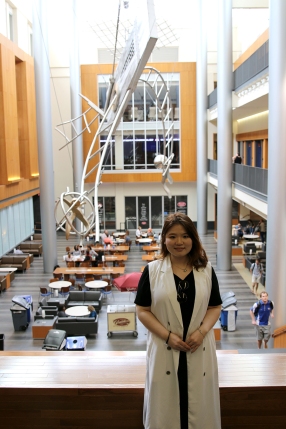 After doing a good deal of research, she says she was confident about making the decision to study on the Lexington campus because she knew it would also be a safe environment, and she would be able to improve her English language skills.

Her undergraduate experience on campus left a big impression on He, and she looked forward to a career in marketing after graduation and returning to China. As fate would have it, her second assignment in marketing turned out to be as an independent contractor promoting the Gatton College of Business and Economics in her native land.

“I originally found a job as an agent or advisor for a company helping students around the world looking for study abroad opportunities,” she says. “My friend Wit (Zhizhi Wang ’17 BE, currently director of market research and development in the Bluegrass International Fund), another Chinese student who graduated from the Gatton College, was working for the Bluegrass Foundation. David Blackwell, the former dean of the college, asked him to go to China to assist with recruiting new students. But Wit already had a job in the United States, so he asked me to help Dean Blackwell.”

That was He’s entrance into assisting her alma mater find new quality students.

Now she spends her days in China recruiting students to the Gatton College. This includes meeting not only with potential students, but with their parents, too. She explains about the benefits of studying at UK and what to expect when living in Kentucky. This is where her own experience as a previous UK student is so crucial to helping potential students commit to studying abroad.

“My experience is recent, and I can tell students about it. Also, I am Chinese, so I know how they think and what they’d like to know,” He says.

“I’m able to help them fill out the application and even find an English tutor, if necessary,” she says. “I tell them to choose the best university for them — not to only look at rankings. UK is a good choice.”

Over the last two years, she says she has been instrumental in helping 33 students come to UK through the 2+2 Program, which allows a student to first study in China and then transfer to UK for the last several years of their studies to earn a degree.

This month, He came to Lexington to help the Chinese students she had recruited from her country settle into their new lifestyle on campus. She says she remembers when she was lucky to have Summer Eglinski, director of Gatton Global Initiatives and an international student advisor in the Gatton College, help her pick her classes when she was a student. So now He is glad to be helping other students, too.

Nancy Johnson, associate dean of International Affairs and associate professor of management in the Gatton College recognizes the many positive benefits that He brings to the table. “Ruby has been extremely helpful in recruiting international partner students. She has the perspective of a new alumna and can positively convey the value of a Gatton undergraduate education in China,” says Johnson.

For any student considering attending UK in the future, He says there is only one thing to consider.

“If they want to be a success, they should come to UK,” she says.

0 comments on “Finding the best and brightest for UK”