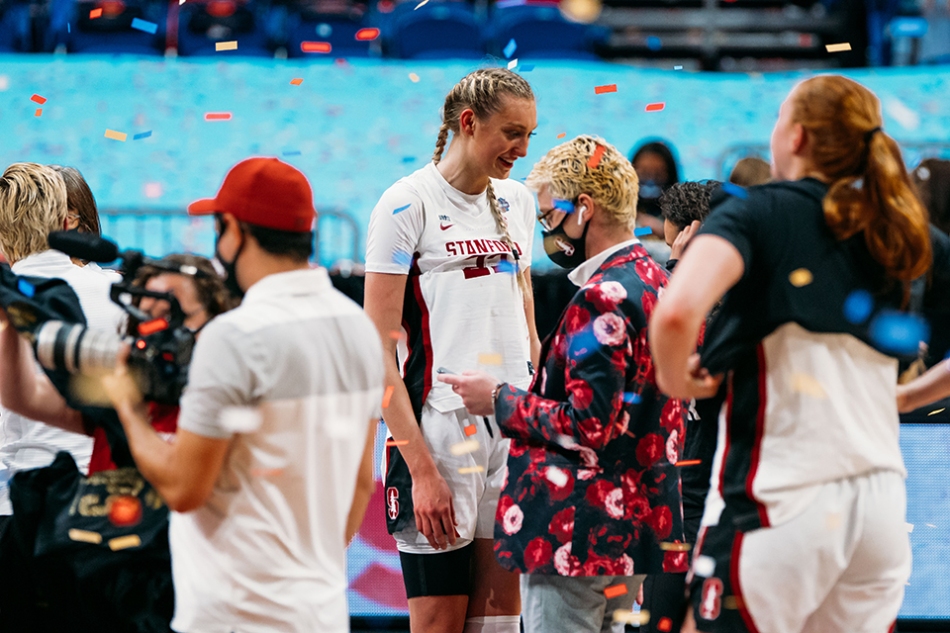 Treadway, who graduated in 2015 with a bachelor’s degree in integrated strategic communications from the UK College of Communication and Information, is the assistant director of sports communications, serving as the sports information director (SID) for women’s basketball at Stanford University. He helped document the Cardinal’s run to the NCAA Championship this past season during a year turned upside down by the COVID-19 pandemic.

“That feeling of finality after it was over was hard but exciting,” Treadway says. “So many points in the season we thought the season could be over because of the situation. And to make it as far and achieve the ultimate goal was incredible.”

Treadway got his start in media and media relations when he started writing for Kentucky Sports Radio as a freshman covering UK women’s basketball.

After a short stint in New York, Treadway worked in athletic communications for the Atlantic Sun Conference in Macon, Georgia. “I liked it, but I wanted to be on a campus,” he says. “I missed events and missed being around a team.”

He then went to work at the University of Pennsylvania for three years before landing in Palo Alto, California, being assigned as the SID for the powerhouse Stanford women’s basketball team.

“I took the job not even knowing I would be covering women’s basketball, but I was super thankful,” says Treadway, who also works with men’s soccer and women’s water polo but loves working with the women’s basketball team. “At this point, I don’t see myself working in athletics if the sport of women’s basketball isn’t involved in some way.”

But nothing he knew could prepare him for what the past basketball season had in store.  The 2019-2020 season was stopped just before the NCAA Tournament in the early days of the pandemic.

“It was beyond surreal. It was the weirdest season working in athletics,” he says.

Due to COVID-19 restrictions, Stanford could not practice or play in their own county. Stanford was able to have two home games in late November before Santa Clara County locked down, so the Cardinal became road warriors.

“If we wanted to keep playing, we knew we couldn’t be here and do it. So we started our never-ending road trip,” he says.

“We just wanted to make it to Christmas and see what happens next,” Treadway says. “We couldn’t go back to campus because we’d have a two-week quarantine. We were living out of suitcases.”

After Christmas, Stanford played road games in Arizona and started having “home” games in Santa Cruz, more than 40 miles away, practicing and playing in an NBA G League arena during January and February. The county finally started loosening restrictions in February, allowing the Cardinal to play five home games to close out the regular season.

The season also forced Treadway to alter how he did his job. With few media allowed at games, he had to learn to do press conferences and other media responsibilities online. He also handles most of the team’s social media.

“I’m actually doing more work once the game is over with all the postgame responsibilities,” he says. “In the Tournament, you’re getting everything prepared for the next game and it’s a mad dash. When you’re living with the team, you pick up other random duties. You are really in it—you’re not just here and showing up for games.

“By the NCAA Tournament, we were well prepared for life in a bubble because of what we had done the whole year. That helped because we knew what we were getting into. It was just insane day to day. Every time we took COVID-19 tests, we knew it could come back positive and we’d have to shut everything down. But once the season started, not one of our girls tested positive. Once we understood the protocols and what we needed to do to stay safe, we did a good job of being flexible.”

And being flexible became one of Treadway’s new job duties.

“At first, I wasn’t sure I was going to be able to travel with the budget and safety concerns within our small bubble. I advocated for myself and said if we’re going on this journey, they’re going to need someone to tell their story,” he says. “And the coaches valued that, so I got approval and we made it happen.”

Treadway also had to become an almost one-man communications team.

“That time was insane. All the media coordination I had to do to get on any talk show I could think of … We were doing stuff on Zoom so that was interesting,” he says.

Stanford entered the NCAA Tournament in San Antonio as a number one seed. After rolling in the first three games. Stanford rallied to beat Louisville to reach the Final Four and survived one-point wins over South Carolina and Arizona to win its first title since 1992.

“The day of the final, I was glad I wasn’t playing I was so nervous. To them, they’ve been in high pressure situations their whole life, so they knew how to handle it,” he says. “For me, one of the biggest parts of the job is the relationships with the team and staff. After the adversity and the type of season we’ve gone through and knowing everyone and developing that bond of trust, I wanted them to win so bad.

“During the game, I handle social media and keep up with stats and who on TV needs interviews. Sometimes it’s hard to watch the game. One piece of advice I got before the championship game was to get the job done, but kind of savor the moment on a personal level. When the game ended, I wanted to savor the moment on the court with the confetti and the trophy and just that moment of pure joy. It’s hard to convey the feeling of that and hard to put into words unless you were there.”

Wilder credits his learning about the job from Susan Lax and Evan Crane, UK associate director of athletics communications and public relations, and said UK journalism professor Kakie Urch has been a good mentor.

“I never worked for UK Sports Information, just KSR. But I worked with folks at UK, and Evan and Susan were texting me throughout the Tournament. At KSR, I learned a ton. And Kakie has always been super helpful and someone who can be a sounding board for me,’ he says. “I am so grateful for all of my UK professors.”

He stays involved with UK through sports and listens to Kentucky Sports Radio every day, calling it his “connection back home.”

0 comments on “Wilder Treadway ’15: Covering a champion during a pandemic”