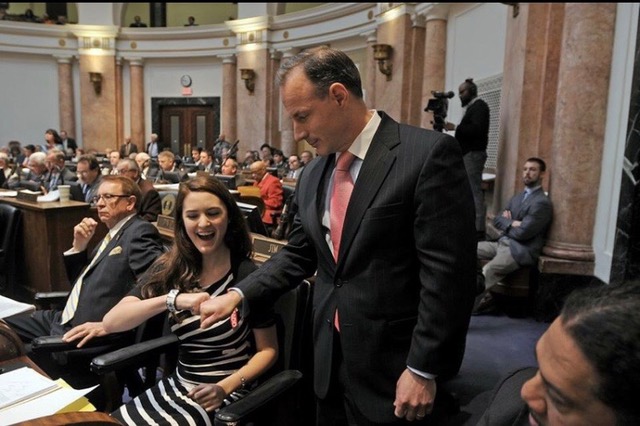 Alex Otte was not sure what her future held.

A near-fatal boating crash due to an intoxicated boater turned her world upside down but also gave her a new purpose in life. Otte, who earned a bachelor’s degree in journalism and minor in political science from UK in December 2018, made history as the youngest president of Mothers Against Drunk Driving (MADD) on Jan. 1.

A volunteer with MADD for more than a decade after her crash, serving as a National Teen Influencer in 2014 and receiving the National Youth Activist of the Year Award in 2015, Otte serves as the organization’s chief spokesperson and advocate.

She briefly worked in corporate communications after graduation, then went to work for the National Association of State Boating Law Administrators (NASBLA).

“I knew I wanted to do something that meant something, so I got involved with NASBLA. I worked on boating under the influence research for the Coast Guard and continued to volunteer for MADD,” she says. “I was asked if I was willing to put my name in the hat to serve on the MADD board. I went through the process but was not selected to serve at that time. I was then asked to serve on a committee for the board, and I did that throughout 2020. It was a great experience and a great opportunity, and I ended up becoming more involved with MADD on a national level through that.”

She was asked to run for president of MADD and was elected in 2020.

This was also the perfect time for Otte to take on a role like this.

“I’m getting married in May, and we don’t have kids or anything. It’s a two-year term and in a non-COVID year there is tons of travel, you’re gone about 75 percent of the year,” she says. “If I was going to do it, I need to do it now. Because in two years, the opportunity may not present itself, and I may be at a different stage in life.”

Otte believes she was elected because of her “passion.”

“I got a letter sent home in high school that I was missing too much school because I was in Frankfort busy trying to pass laws. I bring a new face to MADD. I’ve been involved with MADD for years, and I bring a new perspective in both my age and that I’m an injured victim,” she says. “MADD does an excellent job engaging with families who have lost loved ones, but they haven’t done as good of a job engaging with injured victims.”

Engaging with victims is a perspective Otte knows well since her life was changed forever at age 13 on July 2, 2010.

She was at Herrington Lake near Danville with her parents. Her mother and brother were docking the boat and she was on a jet ski 40 yards out in the water.

“There was 17-foot bass boat coming under a bridge and heading toward them. I gave my mom a thumbs up to let her know that I saw it coming and I wasn’t going to move,” she says.

The boat, however, banked left toward Otte and hit her at nearly 60 miles per hour.

“He hit me from the side, and I landed face down in the water,” she says.

Her injuries made survival nearly impossible.

Otte suffered a brain injury she says was similar to shaken baby syndrome, a shattered jaw which requited metal plates and screws to repair, a broken neck and collar bone and a lacerated liver. She shattered both femurs that required inserting metal rods in both legs and had her right foot amputated.

“The helicopter came and got me and told my parents to say goodbye to me because I probably won’t make it. My mom said she’s never seen anyone that badly injured and survive,” she says. “I had eight surgeries the first seven days and have had countless since. I was in the hospital for several weeks and then went to Cardinal Hill for rehab.

“And this was my new life.”

Otte was also in a medically-induced coma for seven days and the first four days the doctors said there was little hope she would survive.

“But I did. I was told at the time I would never play sports again and probably never walk, and I couldn’t go back to school. That was not going to happen,” she says.

Otte had been a straight-A student at Trinity Christian Academy in Lexington and was determined to get back to school. The second week of August that year, she made it back to school in a wheelchair and neck brace. She had tutors to help with schoolwork.

She says her brain injury has given her short-term memory loss and anxiety when she is tired. “I work hard to make sure people don’t know, but people that do know me know that when I’m tired you can see I have no clue what they’re talking about,” she says.

In 2015, Otte graduated from Trinity and enrolled at UK to study journalism and political science.

“I had a lot of incredible teachers at UK in journalism and political science. (Journalism professor) Kakie Urch really took an interest in me and that was big for me. If a teacher wants me to do well, I will knock it out of the park,” she says. “And she really did care.”

Otte says she minored in political science because with MADD she helped pass two pieces of legislation and wanted to know more about the legislative process. She credits political science professors Stephen Voss and Horace Bartilow for pushing her in ways she had never been challenged.

“They really had no reason to know my name, but I really felt they cared and wanted me to do well,” she says. “So, we’ve all just kept up with each other.”

Since her crash, Otte has had a chance to talk with various groups about her accident.

“I was the only girl at John Calipari’s basketball camp, and the only one with one leg. (Former UK strength trainer) Rock Oliver came up to me and asked what happened and why I was smiling,” she says. “Then he asked if I would be willing to talk to the UK football team. I didn’t think he was serious, but a couple of weeks later I was in front of 120 men with tears in their eyes.”

And while her priorities eventually shifted, her love of sports did not. Her interest in becoming a sports journalist started at age 15 when she got a camera and got a chance to hang out with the UK football team. She was a freelance photographer for various news outlets for a decade.

She has adjusted to her new life and thrived. But Otte says she has to put on a brave face at times.

“I will say it never gets easier, and there are days I don’t want to get out of bed. But the biggest part is, if I don’t keep talking about it, it will keep happening,” she says. “I’m here for a reason, I believe everything happens for a reason, and I’ll spend the rest of my life figuring out what my reason is. I was not supposed to survive that by any stretch, and so there has got to be a reason for it. And trust me, it was not to be the next Erin Andrews.”