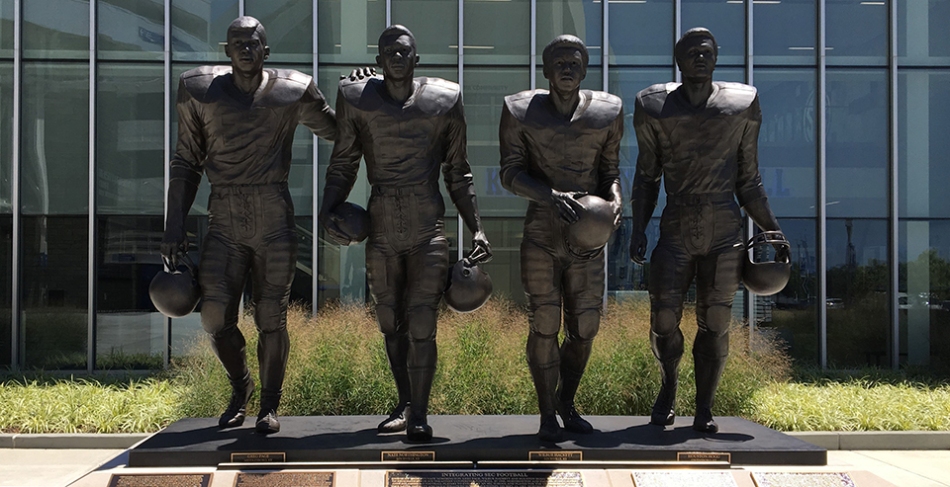 Greg Page was going to make history at the University of Kentucky.
One of the first two African-American football players — along with Nate Northington — to sign with a Southeastern Conference School, Page never got to see his dream become a reality.

Before his sophomore season, Page suffered a paralyzing neck injury during practice in August 1967 and died six weeks later.

Now his younger brother is looking to ensure the name Greg Page continues to have a lasting impact on the UK community.

Mel Page is turning to the University of Kentucky to endow the Greg Page Scholarship, which awards money to a student from any high school in Bell County attending UK. The scholarship needs to generate at least $50,000 to be endowed. Interest earned on the investment will be spent toward an annual scholarship each year for students from the Bell County school system, which includes Middlesboro, Bell County and Pineville. Once endowed, this fund becomes a perpetual account which will benefit students for generations.

The scholarship was first established shortly after Page’s passing and managed locally. It awarded a scholarship to a student from Middlesboro High School, originally alternating between an African-American student and a white student each year.

Mel Page got the idea of expanding the scholarship when the documentary about the four football players who broke the SEC color barrier, “Black in Blue,” was being made by UK alumnus Paul Wagner.

“When they started talking about the statues being erected and Greg had been inducted into the UK Athletics Hall of Fame, I got to seriously thinking about using the interest of this movie to do something with the scholarship,” Mel Page says. “I had talked to Bill Burchfield, who was overseeing the scholarship since it started, and thought, how can we get something going to where we can generate more money? I thought if we put it in the hands of UK and involved all of Bell County, we could serve more students.”

So, Mel Page enlisted the help of family and friends and put a plan into action.

Burchfield, who served as trustee of the scholarship as COO of Commercial Bank in Middlesboro, is proud to turn it over to UK.

“I think it’s wonderful as a remembrance of Greg, he was a super young man,” says Burchfield, who served as trustee for the scholarship for the past 30 years. “His parents were just so appreciative for what seemed like a large amount of money then. And it means the world to Mel. The attitude he had about turning it over to UK was that if it became endowed, the name Greg Page will live on forever.”

For Sheila Key, Page’s name will already live on forever in her mind. Key, a former president of the Cumberland Valley East UK Alumni Club, put Mel Page in touch with the UK Office of Philanthropy.

“I’m a UK grad, and I love football, so when they first came out with the “Black in Blue” movie, I wanted to show that in my hometown because that’s our history and UK is part of our history,” she says. “In the process of getting that set up, I had an opportunity to talk to Melvin Page and discuss everything with him. He told me about the scholarship and wanting to get it under the UK umbrella. I told him I’d like to help and asked if that was OK to help get that set up.”

The scholarship would be expanding on something made possible, in part, by UK Athletics.

Longtime family friend Dana Greene, a local CPA who served as a contact for the documentary, pointed out the scholarship was originally established with the help of UK basketball.

“There was huge fundraising event in February 1968, a benefit basketball game played in Middlesboro gym between the UK freshman and Tennessee freshman teams. The place was packed, with 3,000 to 4,000 fans and proceeds went to the scholarship,” says Greene, who grew up across the street from the Page family. “This scholarship has obviously involved UK from a lot of levels from the beginning. An important part of the original funding came from a UK athletic event. I was there, it was a moving event.

“I still think about it. There was a bronze UK helmet (then-UK coach) Charlie Bradshaw presented to Mr. and Mrs. Page. It was tough. I’m still not over it.”

Once the scholarship becomes endowed and can serve the students of Bell County for generations to come, Mel Page says this will be the best way to keep his brother’s memory — and what he and the other three African-American football players accomplished — alive.

“Not just the Greg Page name, but more of him being groundbreaking and taking on the challenge of integrating SEC football and losing his life doing it,” Mel Page says. “I’m just thankful to have help from so many people in getting this done.”

“It’s so important because it’s history. And not just history for UK, but for the SEC, and that’s pretty huge in my book,” she says. “And the fact he is from my hometown is something to be very proud of. This will continue to be a legacy for Greg and a great way to honor him.”

To donate to the Greg page Scholarship, click here. Contributions to the scholarship can also be mailed to the University of Kentucky, c/o Greg Page Scholarship, 400 Rose St., King Alumni House, Lexington, KY 40506. For more information about the fund please contact Marci Hicks, Director of Philanthropy, at 859-323-7882 or marci.hicks@uky.edu.