Happy Valentine’s Day BBN! 💙 To celebrate, we are sharing #WildcatLove stories. Thank you to everyone who took time to tell us how you and your significant other met at UK.

There is still time to share your story. Just go to www.ukalumni.net/wildcatlove, fill out the form and don’t forget to submit a picture. The best post will receive a prize from the UK Alumni Association.

We hope you enjoy all of our #WildcatLove stories!

Their story: We met through UK Block & Bridle in 2010. From the time we started dating

until now we have been inseparable. We spent many nights studying at Willy T and will always remember celebrating our CATS winning the 2012 National Championship! I found my person, my rock, and the love of my life at UK, and for that reason UK will always have a special place in my heart. GO CATS!

Their story: Jeff and I were introduced by one of my KD sisters and one of his PKT brothers in September of our senior year. It was love at first sight and we were married in June of the following year, 1968. And, we were soulmates, long before the term became fashionable! Our love for Kentucky led us to the UK Alumni Club in Chicago, started a Club in South Bend and finally we returned to the Bluegrass in 1998, settling in northern Kentucky.

While living out of state we made annual trips back to campus for football and/or basketball games. Following sports coverage while living up north frequently meant driving around the neighborhood attempting to pick up a signal or finding a higher location where WLAP reception was available. Both children, “dyed in the wool” Wildcat fans, graduated from UK also. We both felt joy to return to NKY and quickly became season ticket holders for both football and basketball.

Our love story began at UK 49 years ago …… ending with Jeff’s death last year. What a joy to spend 50 years with my best friend – the result of a blind date at UK!

Their story: I met my WildcatLove at a party he and his roommates were hosting (at

Royal Lex) for a friend of mine who I met while living in Blanding IV. We truly have been in separable ever since and have a 9 year old daughter who loves the Wildcats as much as we do. It was love at first sight.

met around 7 years and are married for over 3 years.

Their story: We met while both finishing up our respective degrees while working at the 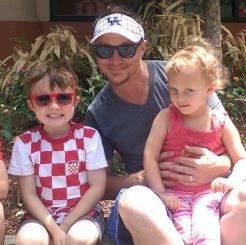 same restaurant. I fell madly in love with her so I would read at the bar while waiting for her to get off work so I could spend a little more time with her. She graduated in 2001 with an Equine Science Degree, also a major turn-on for a farm boy from Kentucky, and I graduated with a degree in Landscape Architecture.

Their story: We met our senior year at UK, fell in love, got married, had two wonderful

children, who in turn also graduated from UK and married UK grads, so we are now a UK party of 6 with one sweet granddaughter who is surely destined to be a UK grad!

Our photo is from a friend’s Halloween party. We went as ourselves —crazy in love UK fans!

Their story: We met in the Agriculture Living Learning Program freshman year and have

been together ever since!

We loved our time at UK in the College of Agriculture, Food & Environment being involved with AGR, Sigma Alpha, and Block & Bridle. I’m thankful everyday that our paths crossed at UK! GO CATS!

Their story: My husband and I met in the fall of 2011 at U.K. while we were both working

in the laboratory of Dr. Michael Bardo in the psychology department as undergrads.

He graduated the following spring and matriculated to medical school at UofL while I completed my undergrad degree and PharmD degree at U.K. we got engaged in 2013 but didn’t get married until September 2018.

We are now expecting our first little wildcat in August 2019!

Their story: We have a nontraditional #WildcatLove story. My husband didn’t go to UK-

he actually went to Indiana. However, one random Saturday in February 2005, he accepted an invite from a friend to go to a UK alumni game watch party in central Ohio.

I walked in, we locked eyes, and by the end of that game watch, we’d put aside our basketball team rivalry. He became a Kentucky fan, and we were married a little over a year later. This is our 15th Valentine’s Day together!

Their story: Well we met at UK, but with a twist! Long before match.com and high speed

Internet there was 56k dial up and Yahoo Messenger.

We met in a UK chat room and began talking. Soon after, we met to study together and have been together every since!

This year will make 20 years together. #wildcatlove!

Their story: We met at Pence Hall in the College of Architecture fall of 1986. I was a

We married in 1993 and have two beautiful children. Ashlyn 22 who is a legacy UK College of Design student graduating in May. And Anderson 17 a sophomore in High School. We live in Greenville, South Carolina, and will celebrate 26 years of marriage this year!

Lets not forget we still bleed blue even though we live in a very orange induced area of South Carolina. Happy Valentines to my one and only Wildcat!

Their story: My husband and I met at UK in the summer of 1991. We were both computer

Now after 27 Valentine’s days spent together, we are still happily married and have two wonderful boys that hopefully will be Wildcat alumnus some day too!

had met the previous fall and had become good friends. Later that afternoon, after taking me to the ER and to the drugstore to get my medicine, John shows up at the dorm with a big blue and white stuffed Wildcat.

We had seen the stuffed Cats at a ballgame in Rupp a few weeks earlier. He called around to see where to buy one. That was his big “play.” That was the day we became a couple.

Today, we celebrated our 40th Valentines together (married 39 years). JD (the stuffed Wildcat) is still with us. He knew the way to my heart was a UK Wildcat! 💙

Their story: Met this cute boy who’s now my husband on the second floor of the William 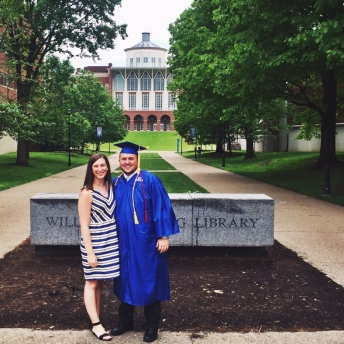 0 comments on “What is your Wildcat Love Story?”