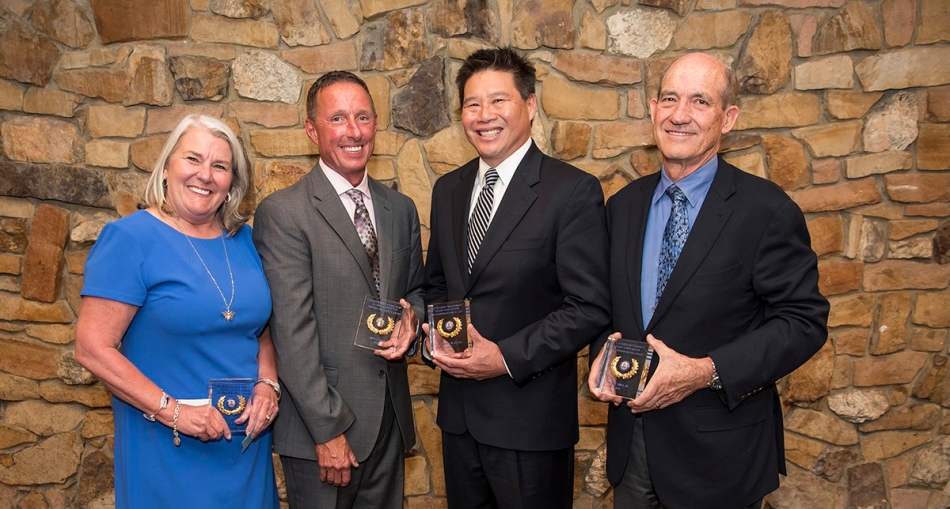 The University of Kentucky Alumni Association Distinguished Service Awards are presented annually to honor and recognize those who have provided extraordinary service to the university and the association. The 2018 recipients were honored during the recent UK Alumni Association Board of Directors Summer Workshop in Lexington.

Dr. Michael Huang resides in Lexington and graduated from the University of Kentucky in 1989 with a bachelor’s degree in chemistry and a medical degree from the UK College of Medicine in 1993. He is the medical director of the Samuel Brown Health Center for Lexington city employees and their families. Huang is also a photographer who has shot UK athletics as a credentialed media member for Kentucky Sports Radio, Tops in Lexington magazine, the Cats Pause and other media outlets. He has donated his time and photographs to numerous charitable causes. He is a member of the Fayette County UK Alumni Club and has been chairman of the club’s golf scramble.  He is a member of the UK Alumni Association Board of Directors, serving on the Executive Committee. As a student, he was in the first class of Otis A. Singletary Scholars, a member of Sigma Chi Fraternity, president of Omicron Delta Kappa Leadership Honor Society, and the 1989 Otis A Singletary Award winner as Outstanding Senior Male. He is a Life Member of the UK Alumni Association and a UK Fellow.

Tanya Jones resides in Louisville and graduated from the University of Kentucky in 1981 with a bachelor’s degree in business administration degree. She is a member of the Greater Louisville UK Alumni Club and has served multiple terms as club secretary. She edited the club newsletter, was involved with Cats for a Cause and was the face of UK in Louisville through her former position with UK on Main. In addition to her work with the university, she is an active alumna of her sorority, Kappa Alpha Theta, serving on the alumni board. Jones is a Life Member of the UK Alumni Association and a UK Fellow.

Kent Mills resides in Madisonville and graduated from the University of Kentucky with a bachelor’s degree in business administration in 1983. He is a UK Fellow, a member of the Hopkins County UK Alumni Club and a past president of the club. He is instrumental in planning the club’s major fundraiser, the 5K Big Blue Run. In addition, he always assists with student recruitment and has become involved with the club’s DanceBlue efforts. Mills is president of Independence Bank. He was named as a community leader by the Chamber of Commerce, helped found the community garden and is active on the Humane Society’s board.

Reese Terry resides in Houston and graduated from the University of Kentucky with a bachelor’s degree in electrical engineering in 1964 and a master’s degree in electrical engineering in 1966. He founded medical device company Cyberonics, which helps patients with epilepsy and other neurological disorders. Terry has been chairman of the Diversity/Group Development Committee, and served on the Executive, Nominating for Board and the Budget, Finance and Investments committees. He is a UK Fellow and a member of the Houston UK Alumni Club, the UK College of Engineering Hall of Distinction and UK Alumni Association Hall of Distinguished Alumni.

For more information on the awards, and to see past winners, visit www.ukalumni.net/serviceawards.